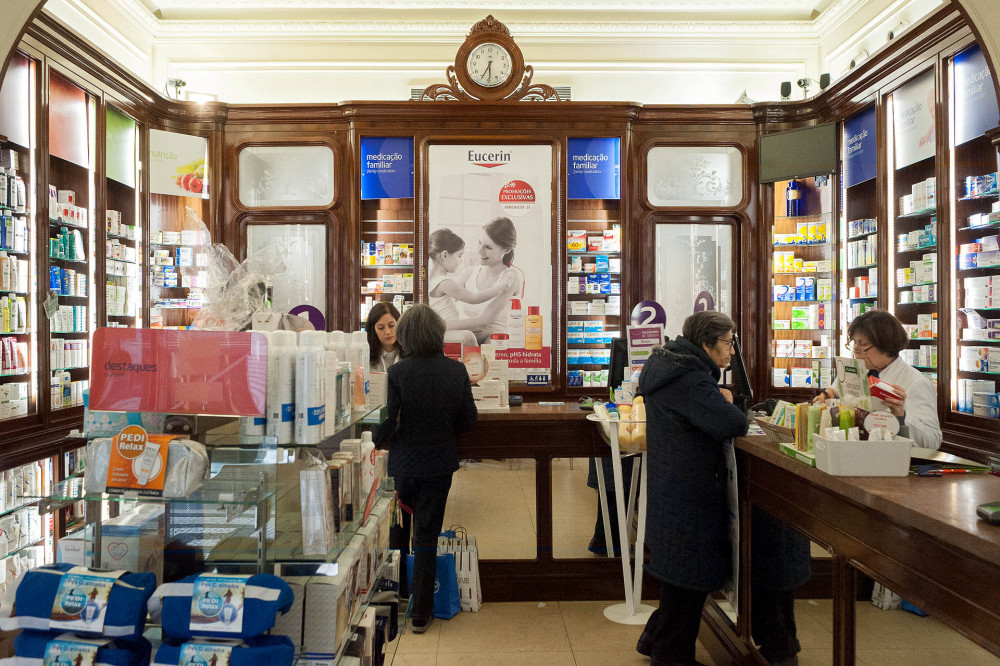 These premises were home to the Farmácia Costa in 1890; the shop only changed its name to Farmácia Normal in 1905, taking its name from the Laboratório Normal founded by Dr. Mourato Vermelho at the same address. Dr. Mourato Vermelho was a pharmacist who rose rapidly through the ranks. He had worked in an apothecary in Angra do Heroísmo from the age of 10, and when he came to Lisbon he was given a job at Farmácia Barral. Barral was a pharmacy that enjoyed great prestige at the time. It functioned as a training school, and Mourato Vermelho had set his sights on having his own business, for which he duly saved his money. The early years in endeavouring to realise that dream, at the Farmácia Normal, proved to be difficult economically. Something more than just selling medicines was needed to keep the business afloat and Dr. Mourato Vermelho, enterprising as always, began creating industrialised products and played a pioneering role in Lisbon in introducing parenteral drugs, which are drugs administered by any route other than orally or through the alimentary canal, which was not a common practice at the time. This led to the emergence of a very successful product that is no longer sold today – Dynamol, a type of health tonic. It sold very well, to the benefit of the overall plans for the pharmacy.

Later, the same laboratory developed Aseptal, a mixture of cetrimide and chlorhexidine to be used for intimate hygiene. This product has a much storied history behind it that would be well worth revealing through research in the Pharmacy Museum’s archives, where there is said to be concrete records on the product’s history. Some versions tell the story of a female lawyer whose clients included some of Lisbon’s more underprivileged groups, and prostitutes; others tell a similar story but attribute the original request for such a product to Dr. Adelaide Jacobetti, one of the first female physicians in Portugal. Either way, it was suggested to Dr. Mourato Vermelho to develop a product that protected the intimate zones of their clients, as there was no other specific product, i.e. with antiseptic and inhibitory properties, available; the pharmacist added a fragrance to the formulation. Which is why Aseptal was described in the advertising of the day as a “perfumed antiseptic”. Perhaps it was easier to break certain taboos that way.

The pharmacy’s interior has undergone several remodellings in its over 100 years of existence, and when one enters the shop today it feels like a modern pharmacy. The more attentive visitor will take delight in the vestiges of the older pharmacy on display, relating above all to how medicines were mixed, in the form of a charming collection of pharmaceutical containers and utensils. The collection also includes old books with handwritten formulations and recipes, and notebooks full of diverse entries recording the pharmacy’s daily operations. And a curiosity: on the document or deed for registration of the pharmacy’s name, dated 1896, one can find a stamp of the Portuguese Republic on top of the royal seal – the various periods of the various Historic Shops thus overlap, are juxtaposed, accumulate; they are stored away in drawers, and displayed in shop windows. The important thing is not to lose them.
Other utensils in the collection are on display immediately on the left when one enters the shop, and a good many are kept in the back of the store where the customer has no access.
If need be, the customer can go through to a consultation room next door, which is basically one of the spaces belonging to the pharmacy. Here it is worthwhile taking in the ceilings richly decorated with stucco and the wooden cabinets, which are from the original shop design. Only the glass doors have been removed to make access to the products easier.

Drugs/medicines and other pharmacy articles 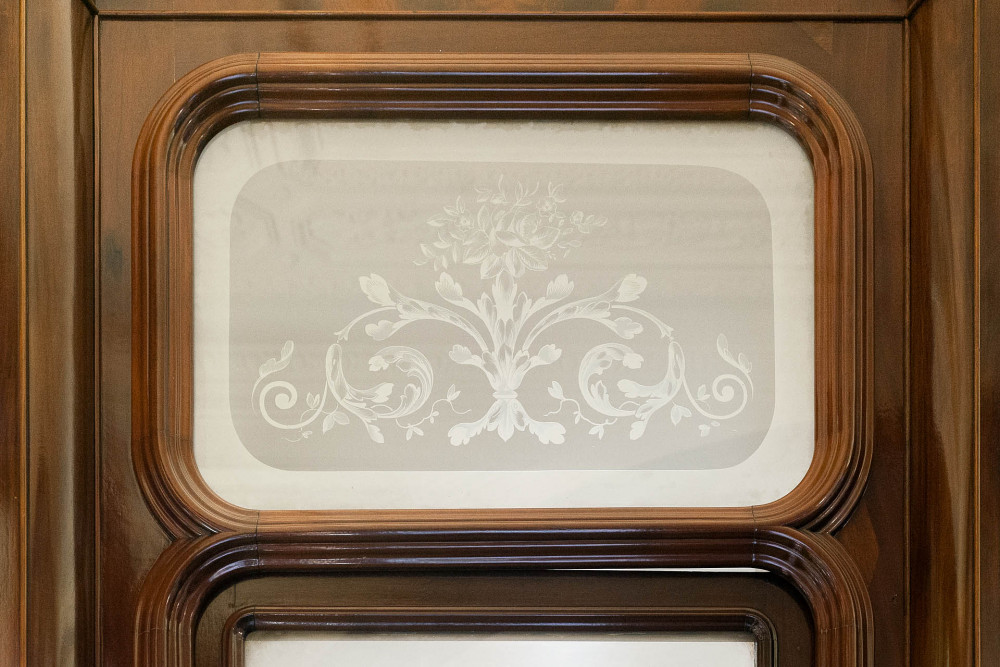 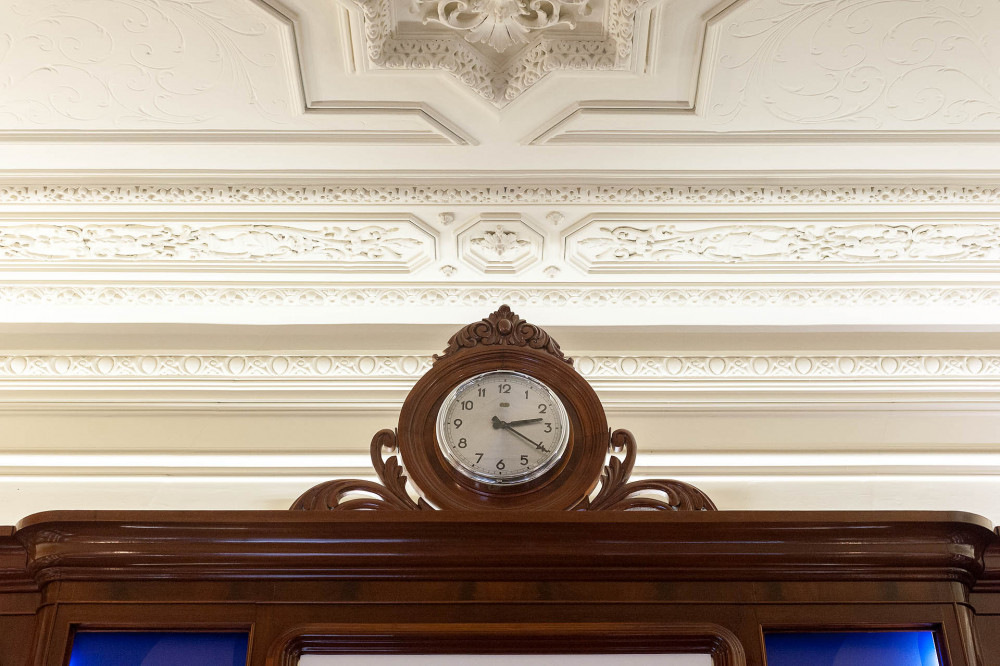 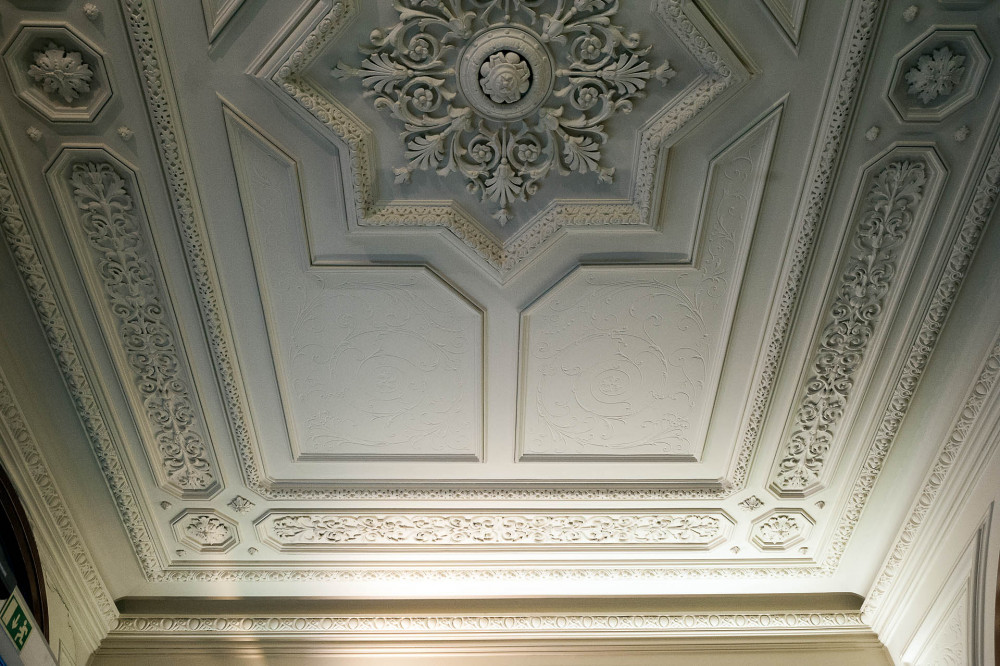 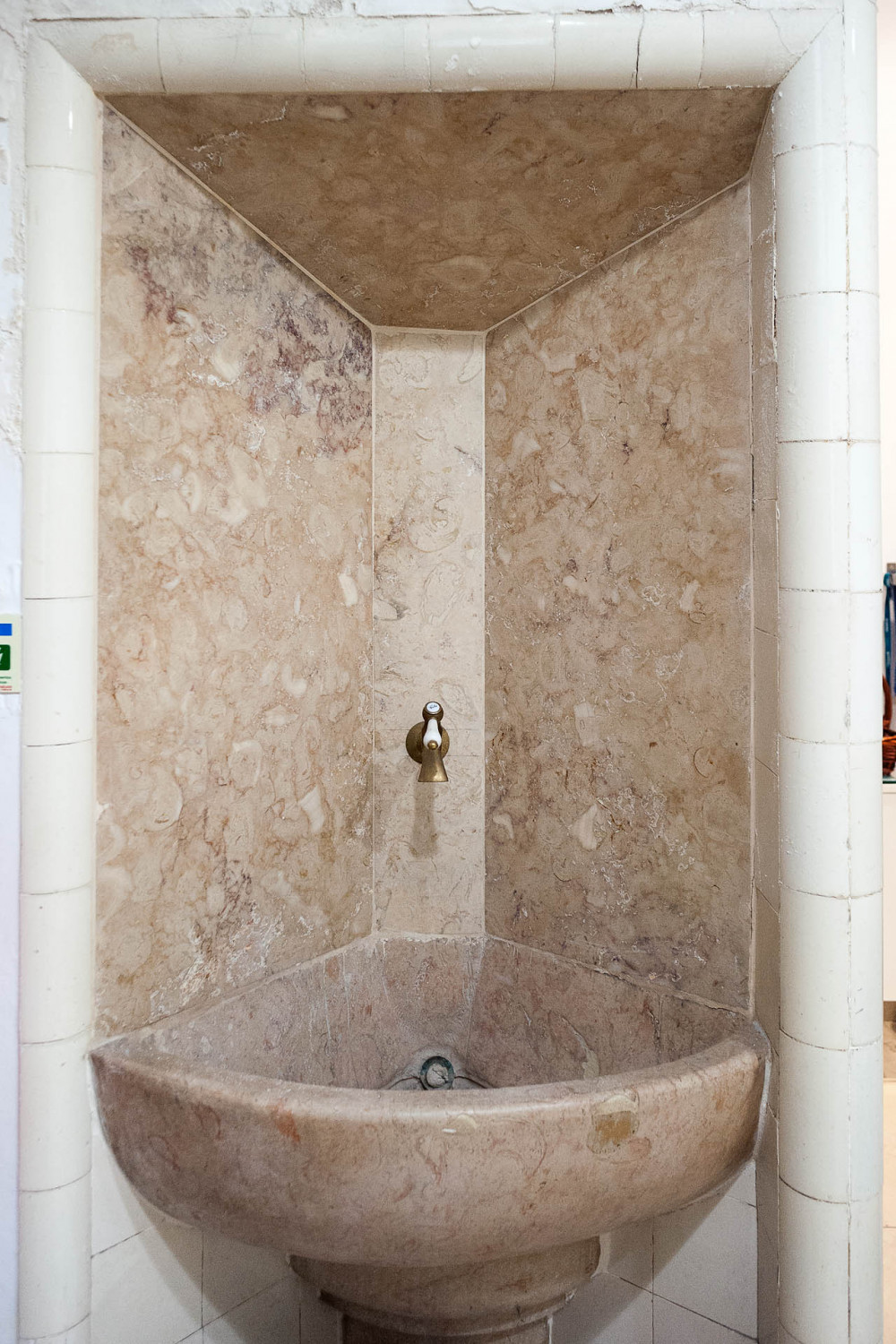 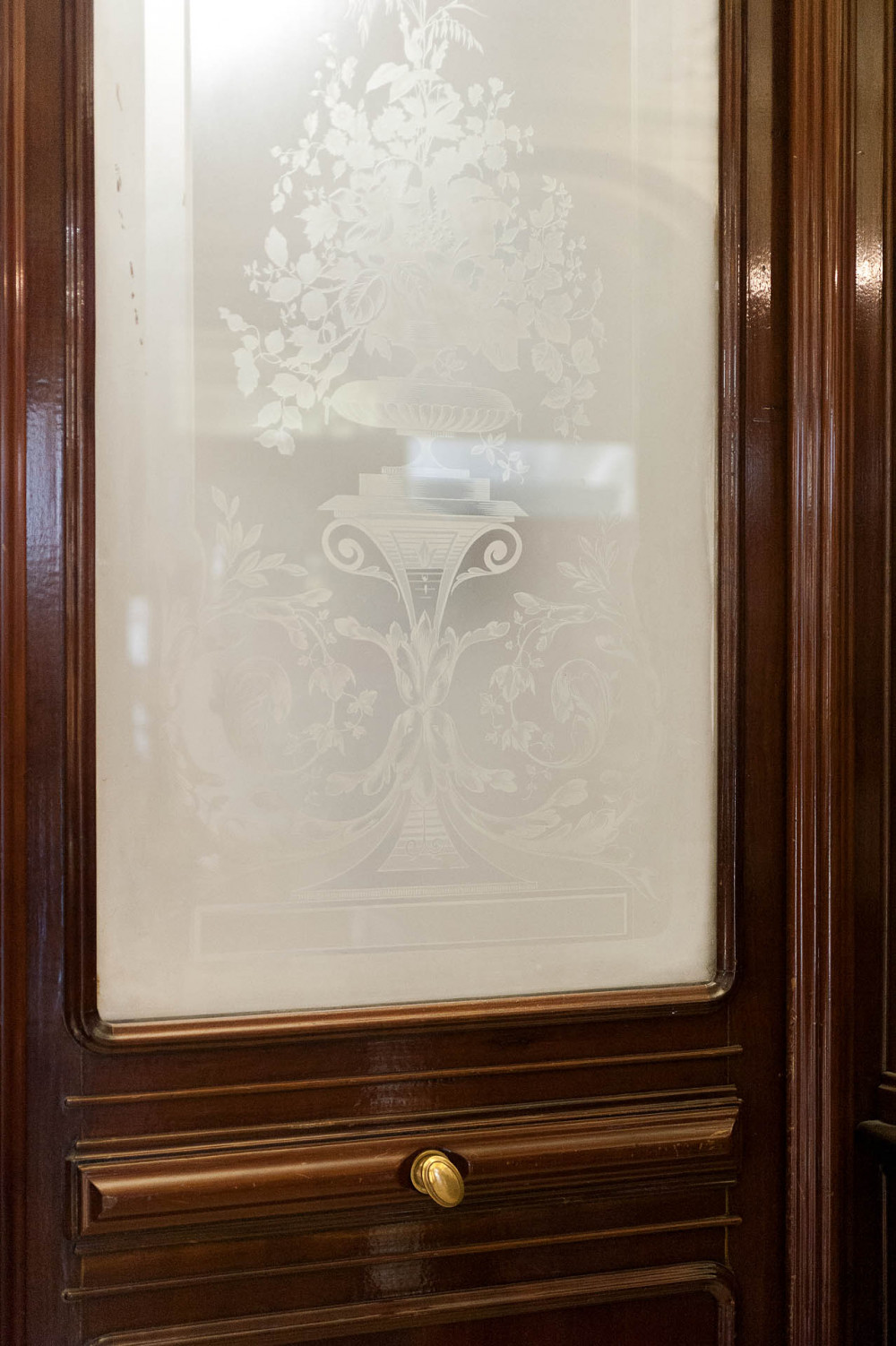 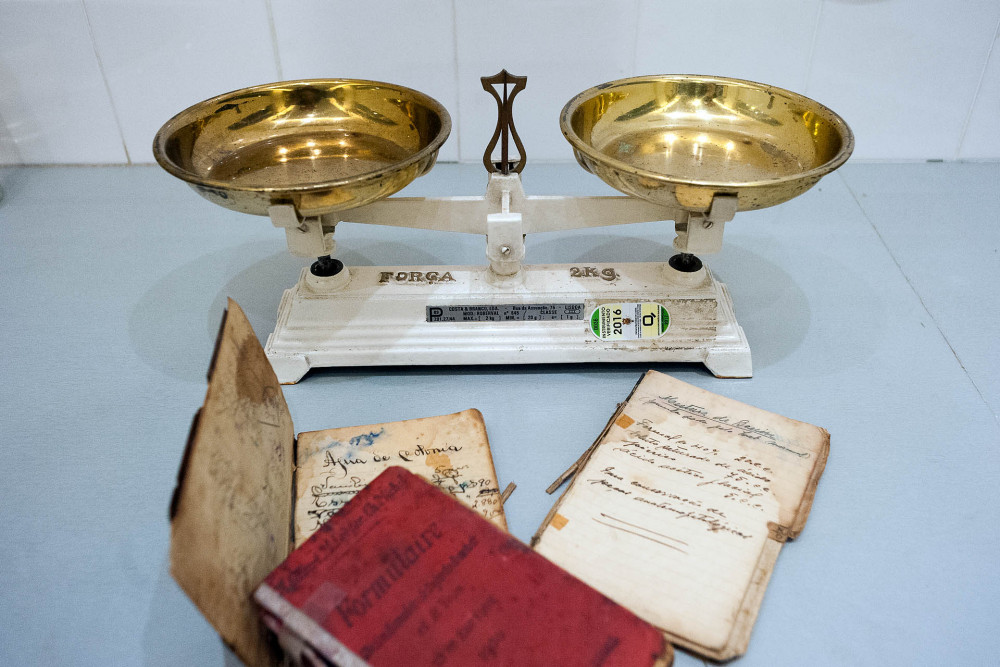 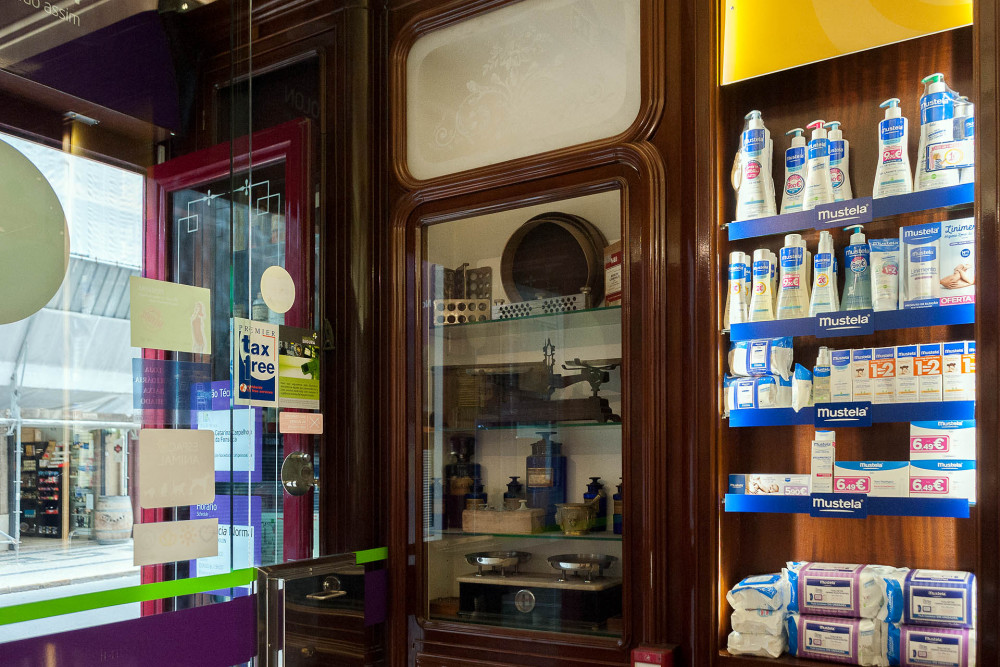 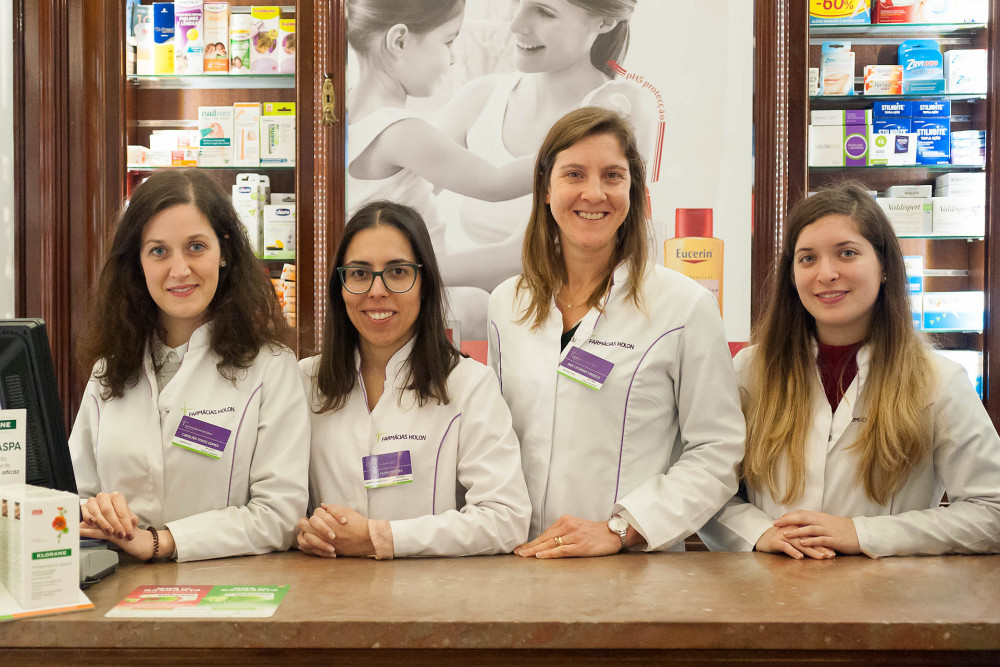 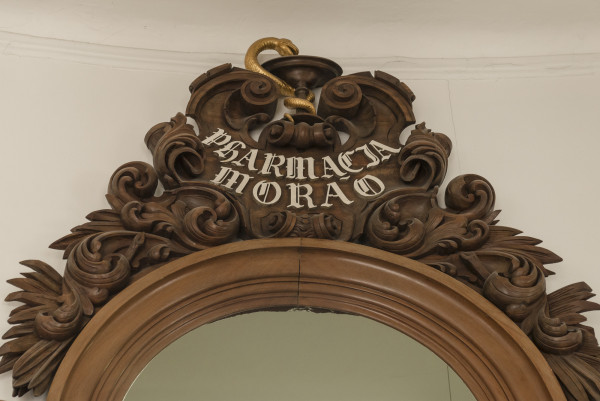 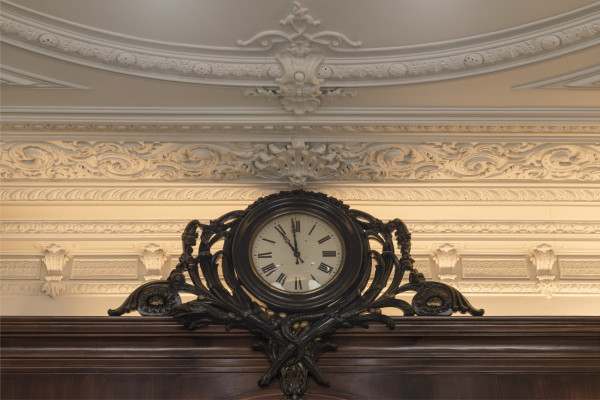 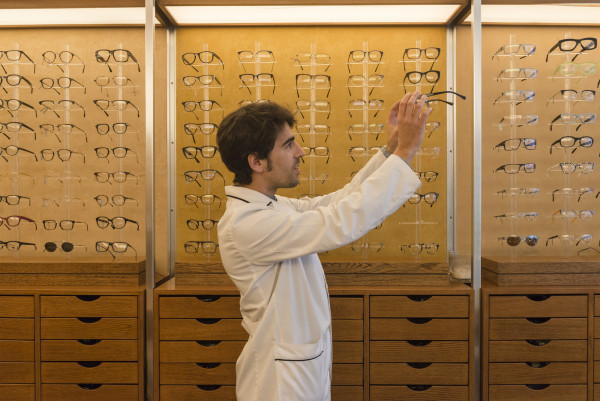 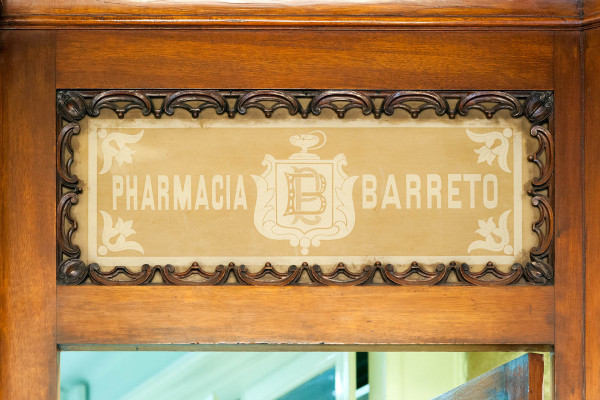 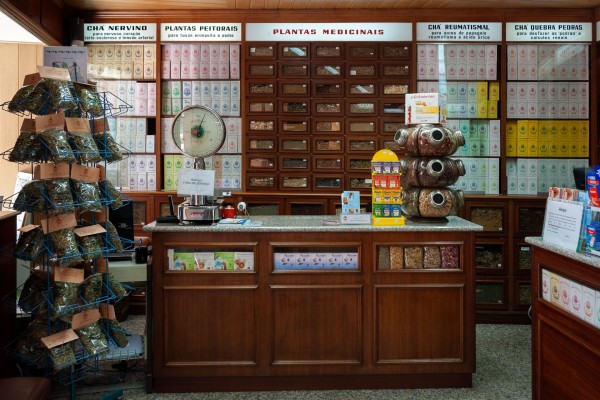 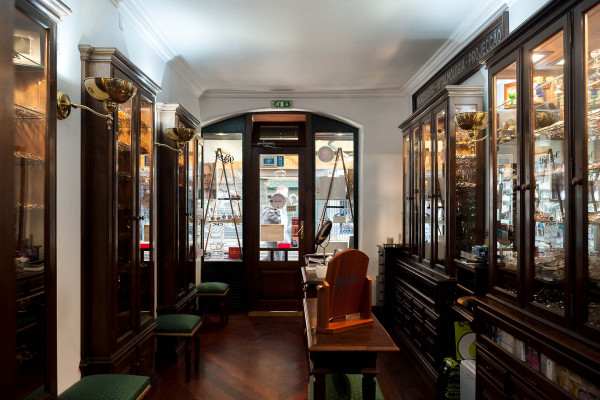